Continue to checkout
-or-
Your Account
Wishlist
EMAIL US YOUR COMMENTS OR SUGGESTIONS, AND WE WILL SEND YOU A PROMO CODE FOR A 15% DISCOUNT. *T&C apply.

Welcome to our PlayOnTheGo guide! You may have just unpacked your travel bag and noticed a tiny drawstring bag. Upon closer inspection, you have realized the bag contains…a set of dice! Why did we decide to include a GAME into an essential travel kit? Because travelling is all about fun! Starting from the moment you are stuck at the train station, in the traffic, at the airport waiting for the check in to start. Your laptop battery is about to run out; you cannot be bothered to read the book you packed. Or maybe, the kids are getting more restless by the second. For those very reasons, we decided to add a set of dice to our #SustainableTraveller bag!

Dice (singular: die) are used today for gambling and playing social games. The most common form of a die is the cube with spots from 1 to 6 arranged in a pattern so that spots on opposite sides always add up to 7. But a cube is not the only shape used! There are plenty of other dice shapes with 4, 5, 7, 8, 10, 12, 16, and 20 or even more.

We won’t get into details on using dice…throw, toss, roll, flip and shoot all you want! We’re certain you pretty much get the drift. But did you know that dice have been used for at least 5000 years to play board games?

A concise history of dice

Dice are the oldest gaming implements known to man! Seriously! It was Sophocles who stated that the legendary Greek Palamedes invented dice during the siege of Troy. According to Herodotus, it was a classic fake news situation: he maintained that the Lydians invented them in the days of King Atys. To spice up the history of dice, both “inventions” have been discredited by numerous archaeological finds who confirmed that dice were used already in many earlier societies.

You probably already guessed what the classic forerunner of dice was. Knucklebones! And yes, dice were magical devices used by old societies to predict the future. In later Greek and Roman times, most dice were made of bone and ivory; others of bronze, rock crystal, onyx, marble, amber, porcelain, and other materials. Cubical dice with markings similar to modern dice have been found in Chinese excavations from 600 BCE and in Egyptian tombs dating from 2000 BCE!

Anyway…what can we do with a 5 dice set?

You’re holding in the palm of your hand a piece of human history! But what to do with it? Other than to toss them several times and see how long it takes to get all 6s?

Here is our subjective list of the best 5 dice games to play!

You are probably familiar with the game of Yahtzee… if you ever played poker before! To start, find a comfortable chair as you are in it for a long time! Players take turns rolling 5 dice to try and make the most favourable hand, and during each turn, each player gets three rolls to make the best hand possible. The result of these rolls is then recorded on a Yahtzee scorecard, and at the end of the game, the player with the highest total of points is declared the winner.

A Yahtzee scorecard has a top and bottom portion. On the top half, there are spaces for one of a kind: ones, twos, threes, fours, fives, and sixes. Players try to get as many of each number as they can. Then the sum of those numbers is recorded in the appropriate space. For example, if after 3 rolls a player gets 3 fours, a 12 (3 x 4) is recorded in the “fours” space.

The bottom portion of a Yahtzee scorecard has spaces for several poker-style hands, including 3 of a Kind (all dice are added up), 4 of a Kind (all dice are added up), Full House (25 points), Small Straight—a 4-card straight worth 30 points, Large Straight—a 5-card straight worth 40 points, Yahtzee—a 5 of a Kind worth 50 points, and a Chance space in which players sum up all the dice after a failed rolling attempt. The person with the highest score at the end of the game wins! The game is over when each player takes enough turns to try for every box on the scorecard once. Contact us to collect your scorecard! 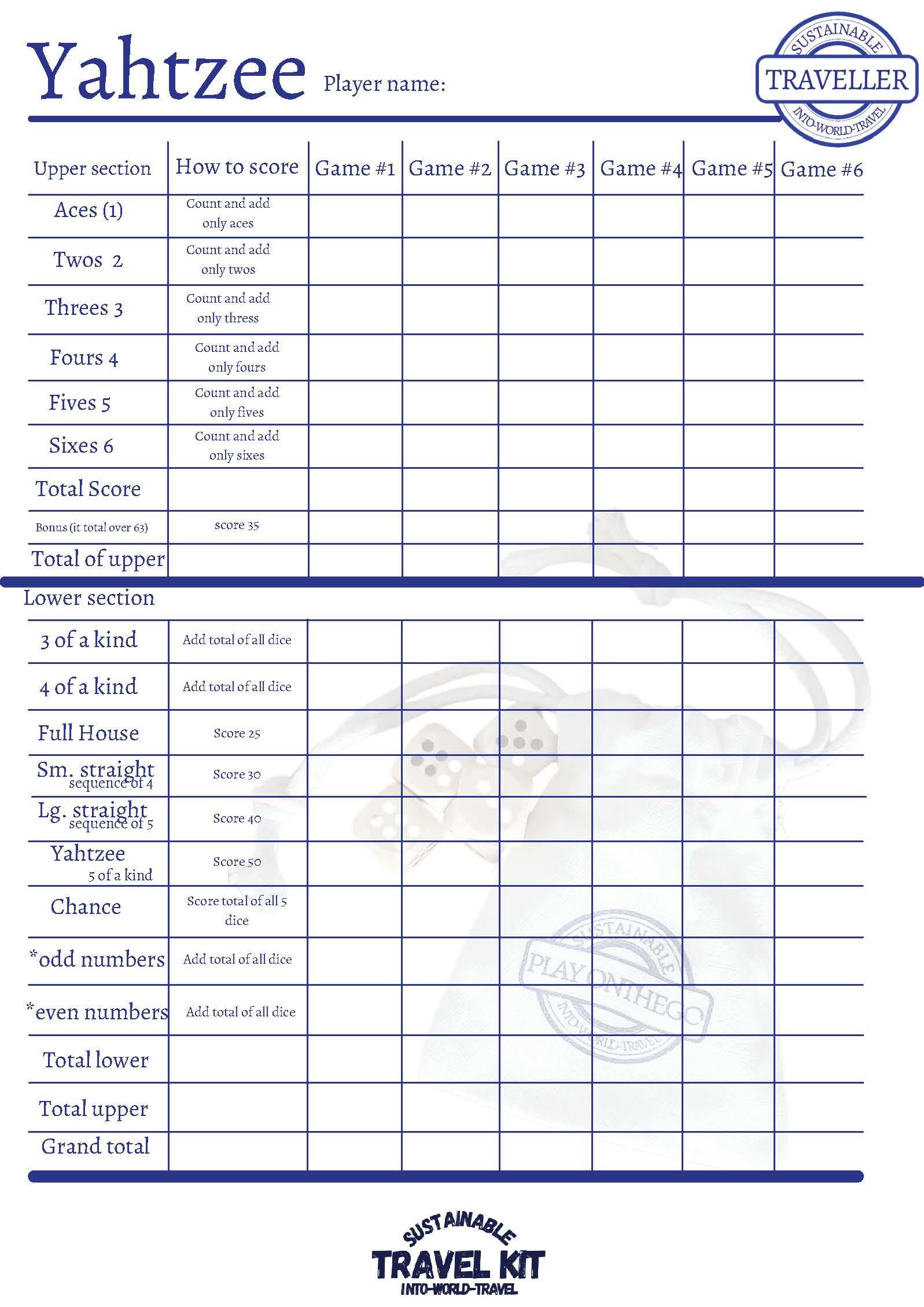 Some people claim it is a drinking game, but you make it a family game too!

Objective: Players want to roll a ship (6), a captain (5) and a crew (4), plus have the highest score possible on the remaining two dice (the cargo). The catch? You must roll the 6, 5 and 4 in descending order. After all, you can't have a captain without a ship or a crew without a captain!

All you need is a pen and paper to keep score. A truly perfect game for practising early math skills (or late math skills as we all sometimes need a good brain exercise)

Instructions: Each player gets four rolls in a row on their turn. On the first roll, we add the highest two numbers and then roll the remaining three dice. On this roll, we take the lowest-scoring die, set it aside and subtract it from the previous sum. On the third roll, we roll the remaining two dice; the higher value die is set aside and added to the current score. On the final roll of the last die, that value is subtracted from the score to make the total. Pass the dice to the player on the left.

Here, each player needs 5 dice of their own. Best played with 3 or more players.

Objective: To be the first player to lose all your dice!

All you need here is a few basic math skills.

Objective: to have the highest score at the end of ten rounds.

STUCK IN THE MUD

All you need is a pen and paper to keep score.

Objective: to score as many points as possible. At the start of the game, players determine either the target is the score; or how many rounds they will play.

Instructions: Roll one die to see who goes first. The player with the highest roll starts. Player one throws all five dice. If his roll contains a 5 or a 2, he scores no points, removes any dice showing a 5 or 2, and re-rolls the remaining dice. If the roll does not contain a 5 or a 2, he adds up the total, records it on the scorecard and rolls all five dice again. He continues in this way until all the dice are removed from play. Play continues with the next player.

Second throw: We roll the remaining three dice with 3-4-1. Score: 8

Third throw: We roll the same three dice with 2-2-4. No score, so we remove the two dice showing a 2.

ALL OF A KIND

There are plenty of possible games to play with the 5 dice. One of the absolutely the simplest and at the same time very satisfying is ALL OF A KIND.

We roll until we get all of a kind: we start with 1s, then 2s and so on. It does get interesting when it takes more than 20 rolls to get all five of a kind! Remember to record the scores, and keep going! There are variations to this game: you can determine your own rules; for example, try getting a sequence from 1 to 5, from 2 to 6. Or any other combinations. This can change into hours of fun!

The game “Knock Out” is a straightforward game for kids—a game that uses just two dice. As soon as kids can recognize the written numbers, they can play this game.

WHY DO WE LOVE DICE

The above list is only the tip of the iceberg when it comes to dice games. Whether it’s for children or adults, there are numerous games and variations of those games to be played! Whenever you think you are making up your own rules, it’s probably already been done before.

What’s best, tabletop games such as dice games have a list of benefits that aren’t possible with other pastimes. What are the benefits of dice games? Improved social interaction with family or friends. Greater problem-solving skills in high paced situations. The dice games promote visualization and innovation and are also a great stress relief. They improve communication and social skills and are a source of an increased sense of achievement and competitiveness.